Building a bridge: how the two hemispheres of the brain connect during development.

The inspiration behind my creative interpretation of the glial cells, which play a major role in connecting the two hemispheres of the brain via the Corpus Callosum⎮4 min 30 sec read
Laura Morcom
Follow
Like Liked by Warren Raye and 1 other
0

It’s been over a century since the first scientists observed that the two hemispheres of the brain are predominantly separated during fetal development before becoming connected by interhemispheric nerve fiber tracts. These connections facilitate learning, memory, social behavior, and integration of both sensory and motor information but some people are born without these connections. Our team has been investigating how the brain structure is remodeled in utero and across evolution to enhance connectivity between the two hemispheres. We identified that glial cells build an interhemispheric bridge during fetal development that allows a large number of neural connections to cross between hemispheres (Gobius et al., 2016: Cell Reports). This event likely first occurred in the ancestors of placental mammals (including humans and rodents) and led to the evolution of the corpus callosum, the largest neural tract in the human brain (Gobius et al., 2017: Neural Development). Failure for this bridge to form is a major cause of disorders where the corpus callosum does not form (Gobius et al., 2016: Cell Reports). I recently won the QBI Art in Neuroscience Award and discuss what motivated my winning creative interpretation of glial cells in the human brain with the Nature team.

Congratulations on winning the QBI Art in Neuroscience Award. What inspired you to create the image?

Here at the Queensland Brain Institute (QBI), we are lucky to have state-of-the-art microscopes that capture high resolution images and QBI has always encouraged creativity through their annual Art in Neuroscience competition. Creative thinking is typically not recognized as essential for science but is actually fundamental for forging new and insightful research ideas. Thus, practicing creativity can be very useful for scientists. I was inspired to create a Christmas-themed image for the competition that ran in December last year. I found a stark resemblance between mistletoe and glial cells in the brain attaching to the interhemispheric fissure, which is a part of the protective meninges that covers the surface of the brain. I created an abstract representation of these structures in my winning image.

Which ‘tools of the trade’ did you use to produce the artwork?

The images were taken on an inverted Nikon spinning disk confocal microscope here at QBI and were manipulated using Adobe Photoshop and Illustrator.

What is the main focus of your research work? What fascinates you most?

My work focuses on novel roles for glial cells in the developing brain. During my Phd, I investigated how glial cells remodel tissue to make way for neural connections to form in the brain. When they fail to do so, individuals are born without the major connection (the Corpus Callosum) between the two hemispheres of the brain. These individuals typically have difficulty with language, learning and social interactions, but in severe cases, they can also have difficulties with movement and processing sensory information. We hope to one day be able to repair this process or redirect these neural connections to their targets via other brain regions. We are also looking at which gene mutations affect the function of these glial cells so we can predict whether individuals carrying these gene mutations may be predisposed to these disorders and how severe they may be.

I am fascinated by the potential for glial cells to perform many different functions in the developing and mature brain essential for electrical transmission. Uncovering their contributions to neural circuits is accelerating our understanding of how the brain works. We are now uncovering that dysfunction of the glial cells rather than primarily the electrical neurons may actually cause a number of nervous system disorders.

How do images like yours contribute to our understanding of the brain and mechanisms of learning?

Images like these are fundamental to our research. The brain is very complex in structure and function but holds many clues to how it works. We stain normal and abnormal brain tissue for many different proteins, molecules and structures to gain insight into how this structure develops and how different regions of the brain function. This allows us to quantify what changes are occurring in normal versus disease brains as well as in response to our experimental manipulations. In this way, we can understand what is absolutely required for these connections to form and function correctly for processes such as learning and memory among others.

We can gain awareness for our research and public interest by expressing our science through art. My wining artwork has already attracted many questions about my research from friends, family and other scientists.

What is the major “take-home” message in your piece?

'Under the mistletoe' by Laura Morcom, Richards Laboratory. Image presented with permission by the Queensland Brain Institute 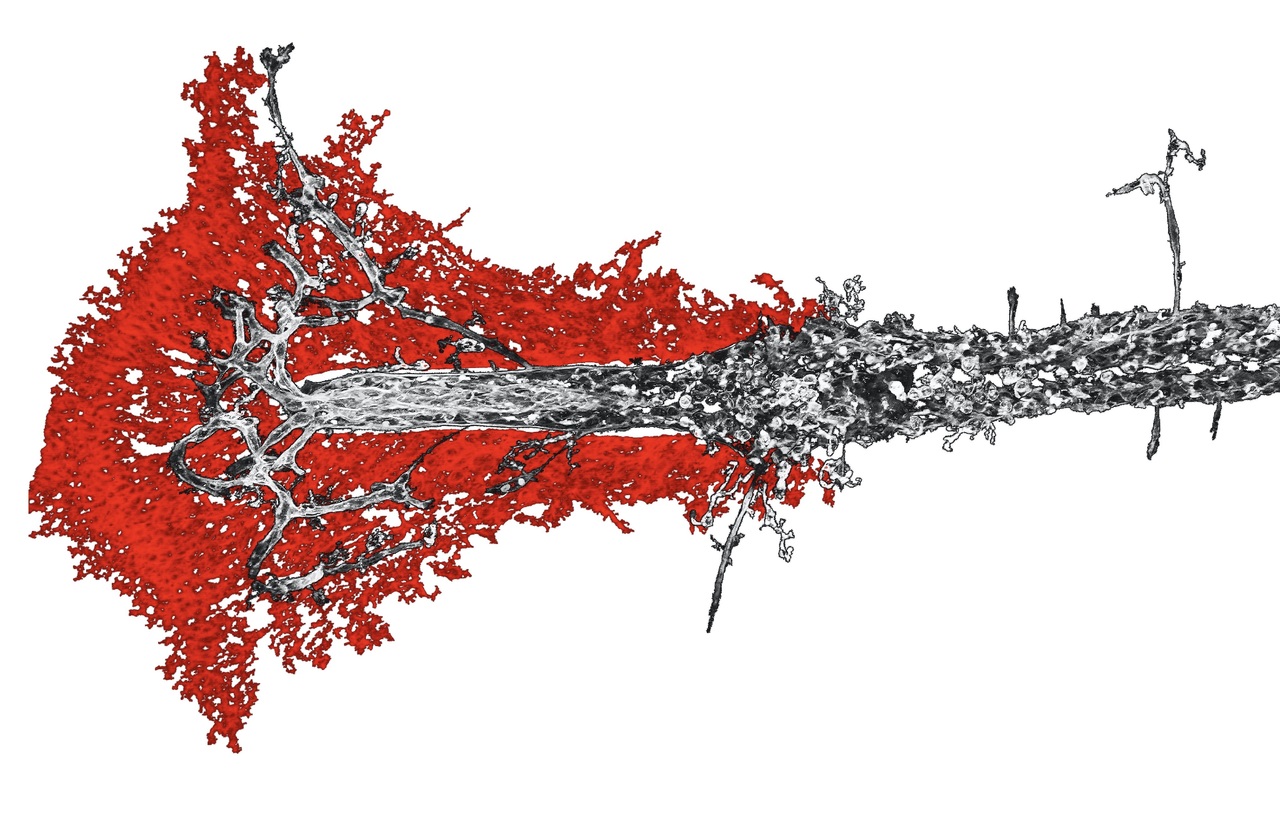 Building a bridge: how the two hemispheres of the brain connect during development.

The inspiration behind my creative interpretation of the glial cells, which play a major role in connecting the two hemispheres of the brain via the Corpus Callosum⎮4 min 30 sec read