A Community from Nature Portfolio
Contributor Scientific Data
Behind the Paper

It's becoming increasingly clear that vestibular processing — our ability to orient our bodies in space and maintain balance and stability both at rest and during movement —  is a very complex phenomenon: it requires not only organization and weighting of data from various sensory inputs, but constant adjustment, through neural feedback and feed-forward mechanisms, in response to internal and external cues. Extensive experimentation using comparative anatomy and tract-tracing techniques, vestibular stimulation, and neuroimaging has provided strong evidence that the "core" of the brain's vestibular system is represented by a handful of areas in the parietal, insular, and cingulate cortex, primarily (but not exclusively) in the right hemisphere.

Recent clinical and experimental observations, however, suggest that this is not the whole story. These core areas appear to be structurally interconnected with their counterparts in the opposite brain hemisphere and with sensory, multisensory, and cognitive regions in nearly every lobe of the brain. Many of these regions serve to integrate sensory data, or related processes such as visuospatial memory or modulation of attention and arousal, and are of obvious importance for our ability to navigate the complex physical world and maintain balance despite our movement within it. Numerous studies have evinced non-normative connectivity between vestibular-visuospatial and cognitive connections in vestibular syndromes such as persistent postural-perceptual dizziness (PPPD) and post-concussive vestibular dysfunction (PCVD), and have shown that many of these connectivity changes are closely associated with clinical outcomes. Moreover, other regions, including the supramarginal gyrus, orbitofrontal and subgenual cortex, and anterior insula, are closely associated with affective (emotional) processes, a finding which comports with observations that associate vestibular stimulation with affective responses and vestibular dysfunction with depression and anxiety. For example, state and trait anxiety appear to influence oculomotor gain and gaze control, and neuroticism scores have been correlated with the degree of connectivity between frontal and visual areas during vestibular stimulation in some patients. Connectivity between these cognitive-affective and sensory-integrative regions and core vestibular areas have been associated with clinical outcomes as well. It seems that a complete understanding of the vestibular system and its dysfunction, and eventually effective patient care, will require extensive investigations at the systems level — far beyond the parietal, insular, and cingulate cortex.

We might draw an analogy here to the concept of the "pain neuromatrix" in chronic pain research, which theorizes that cognitive and affective areas modulate the sensation and perception of pain, even if they do not directly participate in pain processing. Similarly, lower-level sensory areas and "ancillary" substrates may mediate vestibular processing and, possibly, resilience following injury, just as they mediate chronic pain. Our lab has therefore proposed an expanded systems approach to vestibular research which conceptualizes "ancillary," sensory, and vestibular areas as participants in a vestibular neuromatrix, but a great deal of research is necessary to delineate this neuromatrix, its components' contributions to vestibular phenomena, and the dynamics of the connections between them, both in health and disease. Many of the most exciting techniques we could leverage to conduct this research, or validate our findings — functional and structural MRI, functional near-infrared spectroscopy, and some forms of ambulatory encephalography — require, or would be augmented by, a standardized brain atlas which includes not only cortex and subcortical structures, but cerebellum, brainstem, and small nuclei. To date, however, no one atlas with such comprehensive coverage exists. Our recent contribution to the field, the EAGLE-449 atlas compilation, seeks to address this omission.

Our laboratory constructed the EAGLE compilation by co-registering and combining six commonly-used, peer-reviewed source atlases: the JuBrain/SPM Anatomy Toolbox by Eickhoff and colleagues; the SUIT cerebellar parcellation by Diedrichsen and colleagues; anatomical parcellations of the thalamus and hypothalamus by Najdenovska et al. and Neudorfer et al.; and brainstem and diencephalic parcellations developed as components of the Brainstem Navigator template. Additionally, left- and right-hemisphere regions of interest (ROIs), corresponding to parieto-insular cortical region PIC, was kindly supplied by Indovina and colleagues. All cortical regions not included in other parcellations were obtained from the Brainnetome atlas by Fan et al. These source atlases were co-registered, resampled to 1mm isotropic MNI space, masked for white matter and cerebrospinal fluid, edited for overlaps among sources, and cleaned of liminal or "orphan" voxels (resulting from the subtraction of other atlases from the Brainnetome parcellation) using manual techniques and clustering. The resulting parcellation, comprised of separate files for each of the edited sources, as well as lookup tables and an ROI reference spreadsheet, are available on NITRC and GitHub. We're requesting that vestibular researchers help maintain and improve this compilation (correcting any errors, modifying existing ROIs, and subdividing ROIs based on peer-reviewed research) with contributions through GitHub. Additionally, since we had no role in the acquisition, initial processing, or distribution of the source atlases, we ask that investigators cite the original sources, as described in the usage notes of both repositories.

The EAGLE compilation was qualitatively validated by computing semipartial, TFCE-corrected, brain-wide correlations with right-hemisphere core vestibular areas OP2 and PIC using 821 young, healthy adult resting-state datasets from the Human Connectome Project. The results, which are reported in our recent publication in Scientific Data, comport well with the previous structural findings of Raiser et al. and Indovina et al. in that OP2 and PIC exhibited similar, but differential, semipartial correlations with other "core" and "extended" vestibular regions. No direct functional connectivity was observed, however, between OP2, PIC, and subcortical areas, cerebellum, or brainstem nuclei in our validation analysis, although this was somewhat expected based on known neuroanatomy.

Although this iteration of the EAGLE compilation requires further validation, exploration, and improvement, we hope that the community will find it a useful contribution to vestibular research, and will contribute to its continual improvement. We encourage potential users of the compilation to refer to our recent publication for details and additional caveats (statistical and implementation considerations) regarding its use.

The present work was supported by NIH/NINDS grant R01NS119683 and a seed grant from the Emory University Department of Radiology and Imaging Sciences. We would also like to thank Drs. Iole Indovina and Peter zu Eulenburg for providing several ROI templates, including OP2 and PIC, as well as the laboratories and investigators involved in the generation of the source atlases, without whose concerted efforts this compilation would not have been possible.

News and Opinion, From the Editors 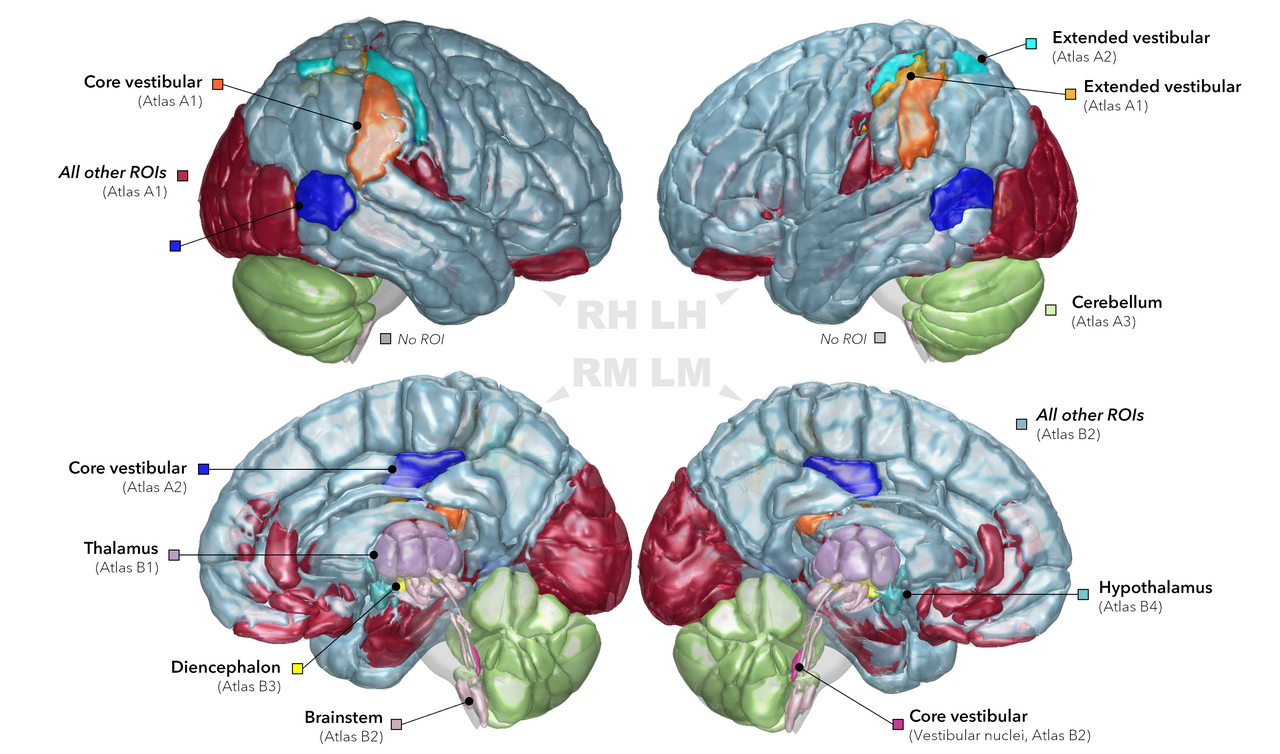 Comprehensive treatment of vestibular disorders requires a systems-oriented approach. A new compilation of brain atlases may help facilitate that research.