A Community from Nature Portfolio
Contributor Translational Psych
Behind the Paper, Brain

Measuring neutrophil-extracellular traps in the blood of patients with early schizophrenia and assessing a history of early stress could help to identify subgroups of patients with immune dysfunction.
Fabiana Corsi-Zuelli
PhD student, University of São Paulo, Ribeirão Preto Medical School
Follow
Like Liked by Evelina Satkevic
0

Measuring neutrophil-extracellular traps in the blood of patients with early schizophrenia and assessing a history of early stress could help to identify subgroups of patients with immune dysfunction.

Understanding the complex communication between the brain and the immune system could help to disentangle biological mechanisms of psychiatric diseases such as schizophrenia and guide more personalised interventions. Schizophrenia is a multifactorial disorder with numerous biological and environmental factors contributing to its development. This debilitating chronic psychiatric disorder is characterised by symptoms known as positive (such as delusions and hallucinations), negative (i.e., anhedonia, social withdrawal), and cognitive dysfunction, with substantial variability in symptoms among individuals. Antipsychotic drugs are used to treat patients with schizophrenia and other psychosis, and these drugs are important to control positive symptoms; yet, they still offer little benefit in controlling negative symptoms and cognitive dysfunction. A better understanding of disease neurobiology is needed to tailor better treatments and interventions.

A growing body of evidence suggests that some patients with schizophrenia have mildly raised levels of inflammatory proteins in their blood, including C-reactive protein and interleukin (IL)-6, and elevated numbers of white blood cells such as neutrophils. Peripheral immune deregulation observed in these individuals may affect how cells in the brain (such as neurons, astrocytes, microglia, and resident regulatory T cells) communicate, culminating in alterations in brain morphology, function, and neurochemistry that may contribute to the development of symptoms. In addition, patients with schizophrenia who display immune dysregulation may be more prone to develop non-infectious inflammatory and autoimmune diseases that substantially decrease life expectancy. Therefore, identifying subgroups of patients with schizophrenia who have alterations in immune proteins and/or immune cells could be useful to guide novel targeted interventions. However, a crucial challenge in the field is how to identify such subgroups with immune alterations using peripheral biological markers.

There is a considerable gap in investigations based on mechanisms related to peripheral blood immune cells in schizophrenia, their relevance to disease pathogenesis, and their contribution to the reported low-grade inflammatory state observed in some subsets of patients. In our new study, we investigated a functional marker of activated neutrophils, known as neutrophil extracellular traps (NETs), as a novel biological marker to better understand the biological basis of neuroimmune dysfunction in schizophrenia. Neutrophils are the most common type of white blood cells in our blood and our first cellular line of defence against pathogens and/or tissue damage. When activated, neutrophils release NETs, web-like structures important to kill infectious agents. However, we now know that NETs are also crucial to both the initiation and chronicity of inflammatory and autoimmune diseases, including rheumatoid arthritis, lupus, psoriasis, diabetes, cardiometabolic diseases, multiple sclerosis, Alzheimer’s disease, and most recently, COVID-19. Anti-NETs compounds have been tested to treat or prevent such diseases. Experimental studies show that inhibiting peripheral NETs using genetic or pharmacological approaches controls both peripheral and central inflammation and symptoms of low mood and cognitive deficits related to inflammation. As NETs are important players in immune-related diseases, we investigated their role in schizophrenia to better understand the biological basis of neuroimmune dysfunction.

Our investigation is the first to assess NETs in psychiatry and the first to combine biological and environmental factors, such as childhood trauma, as a strategy to identify cluster subgroups in early schizophrenia. We included 78 individuals with early schizophrenia, 78 age and sex-matched controls from the community and 25 unaffected siblings of patients. Our results suggested that NETs are elevated in the plasma of patients with schizophrenia compared to both their unaffected siblings and community controls. Elevated NETs in schizophrenia were unrelated to potential confounding variables such as sex, body mass index, tobacco smoking or other psychoactive substance use. The raised levels of NETs in patients were additionally unrelated to antipsychotic treatment. To further investigate that, we isolated fresh neutrophils from healthy donors and exposed these cells to a substance that induces NETs in vitro (phorbol myristate acetate, PMA) in the presence or absence of first or second-generation antipsychotics (haloperidol or risperidone, respectively). As expected, incubation of human neutrophils with PMA significantly increased NETs release from supernatant compared to unexposed neutrophils. Noteworthy, neither haloperidol nor risperidone induced NETs formation. Contrarily, both compounds significantly inhibited NETs formation induced by PMA. In summary, these results suggest that elevated levels of NETs in schizophrenia compared to their siblings and controls are irrespective of some lifestyle factors and pharmacological treatment. It may additionally reveal a functional cellular mechanism for shared comorbidity of inflammatory and auto-immune diseases observed in schizophrenia that contribute to a substantial reduction in life expectancy, including higher mortality from COVID-19.

Next, we assessed whether combining biological and environmental factors could help to identify subgroups of patients with immune dysfunction. For this, we used two biological variables, levels of NETs and IL-6, and assessed all participants' self-reported history of childhood maltreatment. Using two-step unsupervised clustering analyses, we found that higher scores of childhood maltreatment and NETs, but not IL-6, were the most important variables contributing to cluster separation. When we combined the entire sample of 181 participants, two clusters were identified: most of the participants (61.3%) pertained to a ‘lower-cluster’ while the minority (38.7%) comprised a ‘higher-cluster’. The ‘higher-cluster’ had significantly higher scores of childhood maltreatment and elevated levels of both NETs and IL-6 compared to the ‘lower-cluster. When we looked at the distribution of clusters by diagnostic groups, we found that most of the early schizophrenia patients pertained to the ‘high-cluster’ (61.7%), while most of their siblings and controls pertained to the ‘lower-cluster’ (68% and 82.1%, respectively).

Finally, we complemented our clinical findings with a relevant rat model of the disease based on stress exposure during adolescence. This rodent model is known to induce several schizophrenia-like changes in adulthood. We found that male rats exposed to stress during adolescence had increased NETs and IL-6 in serum than control rats not exposed to adolescent stress. These early-stressed rodents also produced more NETs from fresh neutrophils isolated from their bone marrow. These results suggest that psychological stress augments haematopoiesis in the bone marrow resulting in elevated numbers of neutrophils and their release in circulation. Elevated neutrophils in circulation with the release of NETs may contribute to the production of inflammatory cytokines, such as IL-6, that induce neuroimmunological changes.

Our study is the first to investigate NETs in psychiatry, and our findings need replication. Outstanding questions remain. For example, could peripheral NETs reach the brain to interfere with the activity of neurons and glial cells such as astrocytes and microglia or resident regulatory T cells in patients with schizophrenia? Or are NETs more likely to indirectly contribute to a low-grade inflammatory state by inducing the release of cytokines from neutrophils and other immune cells and vice-versa? Are there differences in NETs levels by severity and types of early stress, and what could be the most sensitive period? What dimension of symptoms could be more related to elevated NETs, and so on? We are still working on some of these questions.

While there is still much to dig into, our investigation suggests combining cellular immune mechanisms with environmental determinants could be an exciting strategy for identifying immune biological subgroups in schizophrenia.

This work was only made possible due to an outstanding collaboration between Brazilian scientists from the STREAM lab (Schizophrenia and Other Psychosis Translational Research: Environment and Molecular Biology), Gomes' Lab, and the Center for Research in Inflammatory Diseases (CRID). We thank our funding agencies São Paulo Research Foundation (FAPESP), CRID, the National Council for Scientific and Technological Development (CNPq), and the Coordination for the Improvement of Higher Education Personnel. We are also extremely grateful for all individuals and animals that made this work possible. The illustration was made using Biorender (https://biorender.com/)

Blog written by Fabiana Corsi-Zuelli. PhD student in Neuroscience and Immunopsychiatry at the University of São Paulo, Ribeirão Preto School of Medicine, Brazil. 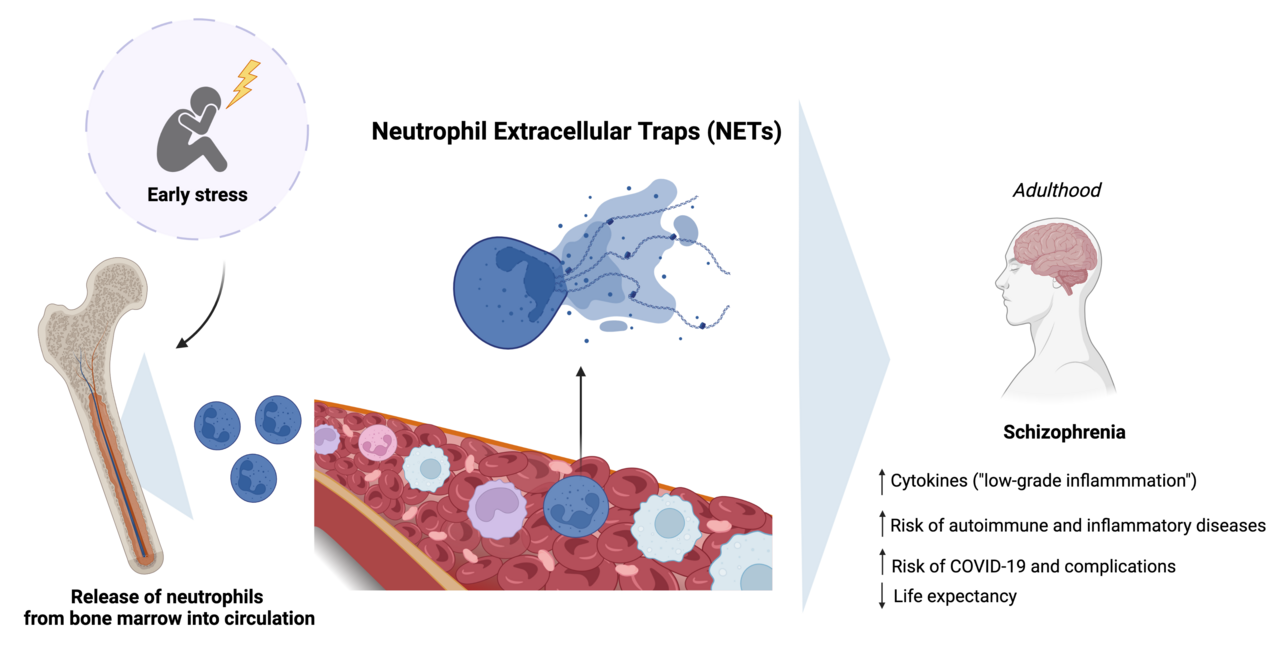 Measuring neutrophil-extracellular traps in the blood of patients with early schizophrenia and assessing a history of early stress could help to identify subgroups of patients with immune dysfunction.